**Sale**
Request Quote
We will beat any competitor’s pricing. Contact us to learn more.

Dicyclohexylcarbodiimide (DCC) and diisopropylcarbodiimide (DIC) are commonly used to prepare amides, esters and acid anhydrides from carboxylic acids. These reagents can also convert primary amides to nitriles, which can be useful in organic synthesis but is a troublesome side reaction of asparagine and glutamine residues in peptide synthesis. Dicyclohexylurea, the byproduct formed from DCC, is nearly insoluble in most organic solvents and precipitates from the reaction mixture as the reaction progresses. Hence DCC is very useful in solution phase reactions, but is not appropriate for reactions on resin. DIC is used instead in solid phase synthesis since the urea byproduct is more soluble and will remain in solution. In certain applications, such as modifying proteins, ethyl-(N’,N’-dimethylamino)propylcarbodiimide hydrochloride (EDC) is used. This carbodiimide reagent and its urea byproduct are water soluble, so the byproduct and any excess reagent are removed by aqueous extraction.

Carbodiimide activation of amino acid derivatives often causes a partial racemization of the amino acid. In peptide synthesis, adding an equivalent of 1-hydroxybenzotriazole (HOBt) minimizes this problem. The OBt esters that form as intermediates couple with primary amines with little racemization, although certain residues such as histidine may be troublesome. Coupling an amino acid derivative to a hydroxy-functionalized resin requires a catalytic amount of 4-(N,N-dimethylamino)pyridine (DMAP). The basic DMAP can produce undesirable levels of racemization, so no more than 0.15 equivalents should be used.

Recently, a low-racemization protocol for linking the unusual amino acid derivative 4,4,4-trifluoro-N-Fmoc-O-tert-butyl-threonine to resin was reported. The protocol utilizes DIC/HOBt coupling with a small excess of HOBt and one equivalent of CuCl2 added.

To avoid the racemization and side reactions that can occur with carbodiimide reagents, many alternative reagents were developed to generate OBt esters in situ. (Benzotriazol-1-yloxy)tris(dimethylamino)phosphonium hexafluorophosphate (BOP) is one of the first reagents developed.BOP does not generate asparagine and glutamine dehydration byproducts and racemization is minimal. BOP is also useful for preparing esters under mild conditions.It must be handled with caution as highly carcinogenic hexamethylphosphoramide is formed as a byproduct in coupling reactions. 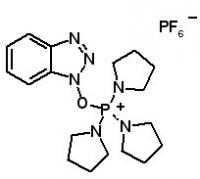 (Benzotriazol-1-yloxy)tripyrrolidinophosphonium hexafluorophosphate couples amino acids as efficiently as BOP, but the byproducts are less hazardous. Coupling reactions are rapid, being nearly complete within a few minutes. (Benzotriazol-1-yloxy)tripyrrolidino-phosphonium hexafluorophosphate may be used in place of BOP in peptide synthesis without loss of coupling efficiency. 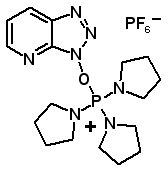 Bromotripyrrolidinophosphonium hexafluorophosphate is a more reactive coupling reagent. It is used in difficult coupling, such as coupling N-methylamino acids or α,α-dialkylglycines, where other coupling reagents are inefficient.

BOP-Cl has been used to attach Fmoc-α,α-dialkylamino acids to trialkoxybenzyl-linked resin. It has also been used to prepare the cyclic peptides linear precursors.BOP-Cl efficiently couples Boc-amino monothioacids to imino acid residues. 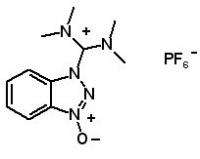 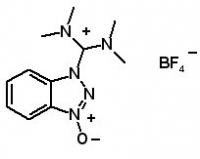 Two other popular coupling reagents are O-(Benzotriazol-1-yl)-N,N,N’,N’-tetramethyluronium hexafluorophosphate (HBTU) and O-(Benzotriazol-1-yl)- N,N,N’,N’-tetramethyluronium tetrafluoroborate (TBTU). As their names reflect, these reagents were believed to have a uronium structure, but crystal and solution structure studies revealed that these reagents actually have aminium structure.Both are very efficient peptide coupling reagents with little racemization. Coupling reactions are complete in as little as six minutes and when HOBt is added, racemization can be reduced to insignificant levels.This makes these the reagents of choice in critical applications. TBTU was very effective, for instance, in key macrocyclization and coupling steps in the total synthesis of the macrocyclic peptide cyclotheonamide B.

These reagents should used in equal molar amounts relative to the carboxylic acid component of the coupling reaction. Excess HBTU and TBTU can react with the unprotected N-terminal of the peptide and form a guanylidine moiety that blocks further elongation of the peptide.

O-(7-Azabenzotriazol-1-yl)-N,N,N’,N’-tetramethyluronium hexafluorophosphate (HATU) is similar to HBTU, but reacts faster with less epimerization during coupling. HATU is preferred to HBTU in most rapid coupling protocols. HATU is utilized in the same manner as HBTU. As with HBTU, HATU should not be used in excess because it can react with the unprotected N-terminal and block further chain elongation. O-(7-Azabenzotriazol-1-yl)- N,N,N’,N’-tetramethyluronium tetrafluoroborate (TATU) has reactivity similar to HATU.

O-(6-Chlorobenzotriazol-1-yl)-N,N,N’,N’-tetramethyluronium hexafluorophosphate (HCTU) remains colorless through long synthesis sequences and presumably has greater stability. It is reported to be less allergenic than other coupling reagents, but nonetheless it should be handled cautiously. DiFenza and Rovero have reported that HCTU showed reduced rates of racemizatin compared to BOP.

Park and coworkers recently reported a fast coupling protocol utilizing HCTU in which coupling times are five minutes or less.

TOTU has been used to couple cyclam to the decapeptide HOE140 to produce a technetium-99m labelled reagent utilized as a bradykinin B2 receptor imaging agent and to assemble Mtr-Asp(Peg)-D-Adf-Pip, a potent, long-lasting thrombin inhibitor. Recently, TOTU was used to couple Boc-glycine to a secondary amine. In similar applications, TOTU was used to prepare PNA monomers by coupling functionalized carboxylic acids to 2-aminoethylglycine derivatives.It has also been used in PNA synthesis.

COMU was developed by Albericio, El-Faham and coworkers as a safer and more efficient coupling reagent than the benzotriazole-based reagents such as HBTU. They found that replacing one of the dimethylamino moieties improved solubility and overall performance. In addition, only one equivalent of base was required to obtain high yields rather than two equivalents needed for HATU and HBTU.

While HBTU, HATU and HCTU have been shown to exist primarily in primarily in the guanidinium form, COMU exists only in the more reactive uranium form.

In the coupling of peptide fragments to form SK&F 107647, TDBTU was shown to produce significantly less epimerization than PyBOP, HBTU, HATU, and many other common coupling reagents. TDBTU was utilized in the large scale synthesis of over 2 kg of SK&F 107647.

TSTU is used to form activated N-hydroxysuccinimide esters and to perform coupling reactions in aqueous solutions. It is quite useful for coupling glycopeptides and conjugating oligosaccharides to proteins. Recently, TSTU was used to couple highly water-soluble dyes to a beta-alanine linker, forming amino reactive fluorescent labels for biological microscopy. In addition TSTU, used with N-hydroxysuccinimide and CuCl2, is reported to eliminate the racemization during coupling of peptides containing a carboxy-terminal N-methyl amino acid.

TNTU is a uronium compound derived from N-hydroxy-5-norbornene-2,3-dicarboxylic acid imide. TNTU has been reported to produce little racemization during coupling. Like TSTU, TNTU can be utilized for coupling reactions in aqueous solvents and was recently tested in solid phase peptide synthesis in water. One special application of TNTU is coupling biomolecules to 11-mercapto-undecanoiuc acid which, in turn, bind to gold electrodes forming highly sensitive sensors for binding studies and assays.

TPTU has been utilized in solution phase coupling of protected dipeptides with aminoketones. It has also been utilized to preactivate Fmoc-amino acids in solid phase synthesis. It has been reported that TPTU produces a high coupling yield but induces a greater degree of epimerization than other coupling reagents.TPTU has been utilized with HOBt to couple primary amines to 1-(beta-D-ribofuranosyl)pyridin-2-one-3-carboxylic acid, forming a series of 3N-carboxamides. It has also been incorporated as a sensing material into membrane based potentiometric sensors for uranium determination.

3-(Diethylphosphoryloxy)-1,2,3-benzotriazin-4(3H)-one (DEPBT) is a coupling reagent that causes very little epimerization during coupling. It is especially useful for coupling easily epimerized amino acids such as arylglycines. DEPBT was also shown to be a superior reagent for head-to-tail cyclization of linear peptides.

Carbonyldiimidazole (CDI) is useful for forming amides, esters and thioesters. It is not commonly used in routine peptide synthesis, but is quite useful for coupling peptide fragments to form large peptides and small proteins. One unique application of CDI is the preparation of urea dipeptides.

TCFH was able to couple acids to thiocoraline, forming prodrugs, where standard coupling methods failed due to the low reactivity of the quinolinic alcohol.

DiFoena, A. and Rovero, P. “Racemization studies on a novel Cl-HOBt-based coupling reagents” Presented at the European Peptide Symposium, August 2002.

We use cookies to ensure that we give you the best experience on our website. If you continue to use this site we will assume that you are happy with it.Ok