**Sale**
Request Quote
Try our high quality amino acids, resins and reagents and see just how much better your peptides can be!

The carbodiimide coupling mechanism is not fully understood.  In the initial step, one molecule of the carboxylic acid [1] reacts with one molecule of carbodiimide [2] to form an O-acylisourea intermediate [3](J Rebek, D Fietler, J. Am. Chem. Soc., 1973, 95, 4052 ).  This intermediate can react with a reactive amine to produce the amide product [6] and the urea by-product [5].  Solution phase reactions appear to follow this course. 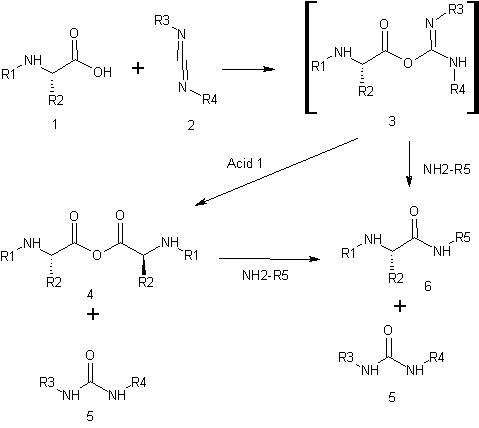 The O-isoacylurea can also react with a second molecule of the carboxylic acid to form the symmetrical acid anhydride [4] and the urea by-product [5].  The acid anhydride in turn reacts with the amine to form the amide product [6].  Evidence suggests this is the mechanism of amide formation in solid phase chemistry (J Rebek, D Fietler, J. Am. Chem. Soc., 1974, 96, 1606).

In a slower side reaction, the O-isoacylurea can rearrange to an unreactive N-acylurea (DF DeTar, R Silverstein, J. Am. Chem. Soc., 1966, 88, 1013 ).  In solution phase synthesis, this side product has to be separated from the desired product resulting in difficult purification and loss of yield.  In solid phase synthesis, removing this side product in not difficult, but the side reaction can reduce yield and result in incomplete coupling.  Utilizing an additive such as HOBt or HONSu minimizes the formation of the N-acylurea side-product.  The additive reacts with the O-acylisourea, forming an activated ester more rapidly than the rearrangement reaction.  The active ester, though less reactive than the O-acylisourea, is sufficiently reactive to react with the amine and form the amide product.

DCC has been utilized to form peptide bonds since 1955 (JC Sheehan, GP Hess, J. Am. Chem. Soc., 1955, 77, 1068). It is a waxy solid with a low melting point.  The easiest method for handling DCC is to place the container in a warm water bath, melt the DCC, then dispense it as a liquid.  Dicyclohexylurea (DCU), the byproduct in DCC couplings, is nearly insoluble in all common solvents.  This property makes DCC a good choice for solution-phase reactions where the DCU can easily be removed by filtration.  It also limits its utility in solid phase peptide synthesis, where separating the urea byproduct from the resin-peptide is difficult.

DIC is a clear liquid that can be easily dispensed by volume.  It slowly reacts with moisture from the air, so for long term storage the bottle should be flushed with dry air or inert gas and sealed tightly.  The byproduct of DIC coupling, diisopropylurea (DIU), is soluble in the common SPPS solvents.  Thus DIC has been widely used in automated solid phase peptide synthesis.  Although reagents such as PyBOP and HBTU have replaced DIC in most solid phase peptide synthesis, DIC used with the additive Oxyma Pure produces superior results in many cases.

EDC HCl is a water-soluble carbodiimide.  The urea byproduct generated during coupling reactions is also water-soluble.  Coupling reactions with EDC are easily worked up by simple aqueous extraction.  EDC HCl can be utilized in aqueous solvent mixtures, thus making it the preferred reagent for conjugating large biomolecules in such applications as: